Welcome to the series on migrating our existing software from bare metal to cloud. This will be our last post in the first sprint, but also the very first sprint review! We have a LOT to cover, so let’s get going!

So for those that haven’t read all the posts (or seen all the videos) a quick recap either by visiting the previous posts:

or here is a short TL;DR:

We have a need to migrate existing software from bare metal to cloud. Why, you might ask - to be able to scale up with the customers without the need of constantly buying new hardware.

The majority of the stack is a LAMP deployment. Thankfully it is a microservice oriented architecture, so it is possible to eventually drop a service here and there and put in a newer and fresher version.

There is some existing documentation, but lacks some key deployment and interaction parts. This point is the most painful one that prevented me from advancing further faster.

So in order to address all of these three major points, I have started working on bringing the application up-to-date with the latest technology trends. In order to track the progress and show you the lessons learned, I have opted to split the work into sprints and make videos and posts about it, just like this one. The first sprint was 7 working days in total. There were breaks in between, but all in all, it was 7 days spent on the work at hand.

Let’s start with reminding ourselves what the board looked like at the end of our first sprint planning. 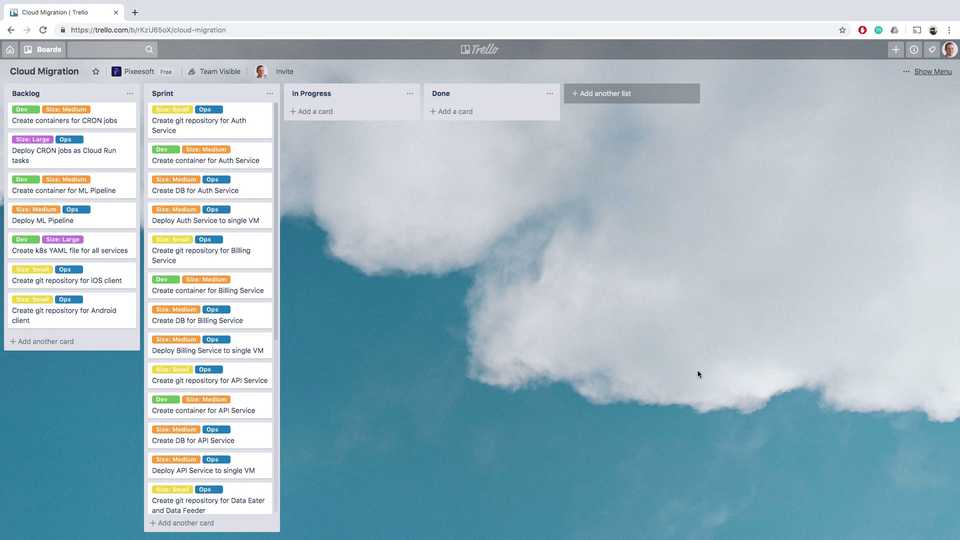 As you can see, the board is optimistically filled with loads of tasks, rated (to my best knowledge) by their difficulty (or amount of effort). Here is the board after the sprint. 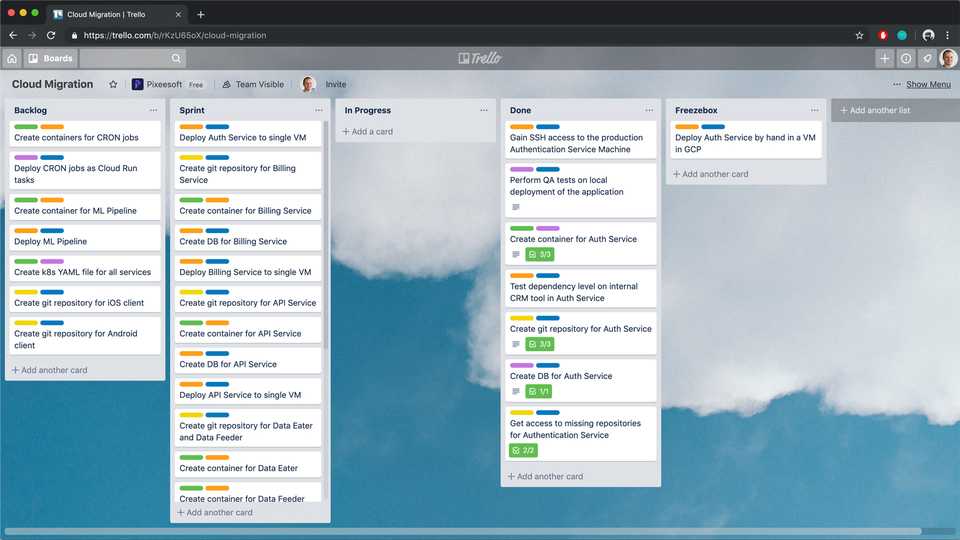 At first glance it might seem like a failed sprint. That depends on your measure of success. Sure, if you have a customer waiting for the product, this would be a failure and you’d have to explain a lot of things. I’m not particularly in a rush, but I will explain to you why this happened. Also you may notice a task in Freezebox that looks almost identical to the one in the Sprint backlog. At one point I added this task as I started doubting that a Docker container would even be possible. But then I calmed down, found a solution and moved this task into the freezebox, from which I will simply delete it.

There were three main errors that I made in the planning:

I was too optimistic with my task estimates. The majority of the tasks needed way more attention than I anticipated.

There were many subtasks that I didn’t see coming and that had to be completed in order to finish the task I was working on.

Example: Create a Docker container for the Auth Service. Seemed like a half a day of work. But there were obstacles. And frankly, I had some missing knowledge. I had to look up how CentOS works in a Docker container, particularly the SELinux part. I didn’t have all the knowledge regarding the folder structure of our in-house PHP framework. That resulted in both in readjusting the size of the task and adding new tasks. You can imagine that messes up the schedule quite a bit.

I underestimated the amount of work needed to make these videos. My idea was - I’ll shoot two big videos each sprint - planning and review/retrospective. Those, I thought, would take a maximum one day. Then I’d shoot standup videos and put them together each day I’m working on the migration. But that’s not sustainable, because even though, the standups are meant to be shorter, they still take about 75% of the day to make, which leaves me with 25% to code and then go overtime into the evening. And while I don’t mind working late from time to time, it’s just not great. So at one point during the sprint, I thought - I could do a standup video and then work for the rest of the day, plus the day after. Otherwise I wouldn’t have anything interesting to report! But I still have a feeling a standup shouldn’t take THAT long. It kind of defeats its purpose.

So which of the tasks did I finish? Mainly everything around the Authentication Service:

You might be asking - did I accumulate any technical debt? Yes I did.

Truth to be told, I am not keen on keeping this part of the application alive for too long. I feel like there are better open source solutions, or even Firebase that has authentication for free and frees you from the burden of running it yourself. This obviously poses you in a vendor lock-in so I’ll analyze the situation and I’ll let you know.

The Good and The Bad

So what are the good outcomes of this sprint?

What are the bad outcomes?

So there it is, our first sprint review. We went through the tasks, key takeaways, the good and the bad and some things to note in the future. But let’s hear from you now - How do you go about doing sprint reviews and restrospectives? Do you focus more on the product, or on the people? Let me know on any social platform - facebook, twitter or instagram!